Posted by beckylevine on 6 Aug 2012 in Uncategorized |2 Comments

Okay, so after a careful, thorough,  and extremely scientific analysis, I can tell you that–for me and my family–a vacation consists of an adventure or two (or not, for those who don’t so choose); a lot of late, but large breakfasts; quite a bit of driving; some goofiness; books; and about one museum. Music shops, in the plural. Coffee and candy whenever and wherever they show up. Maybe a movie (Yes, I did go see THE DARK KNIGHT RISES. Overall feeling? Not bad. But..yeah, you can take the Marvel-comics girl into the DC theater, but you can’t make her switch teams.)

The guys started with a day underground. They spent four happy hours, as the only people other than the guide, doing all the ups and downs and ins and outs of the Middle Earth Expedition at California Caverns. I have no photos, because why? Because I am the claustrophobic one in the family, and no tantalizing descriptions of an underground lake (very cool thought!) and lots of goopy mud requiring you to wear high-top shoes (also pretty cool thought, if only in theory) are getting me into those caves. Or those tiny, tinyvcracks in those caves. If I want to get totally stressed out and anxious and trapped-feeling, I can always reread Nevada Barr’s Blind Descent (which, if you haven’t, you should!).

What did I do instead? 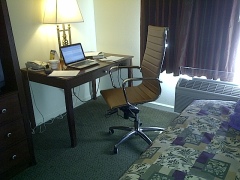 I plotted. I had told myself that this was my chance to get something going on the plot of my YA historical. I was definitely feeling a bit like the book was headed toward a drawer, which wasn’t making me happy, but I was also feeling very not willing to keep bumbling/rambling around anymore. I’d finished Donald Maass’ Writing the Breakout Novel and most of Save the Cat,  and I had lots of story thoughts and notes. I took those and my Scrivener software, and I got lots of scene cards up for Act I and Act II. I still have some way to go, but now that way feels possible. Happy work to come!

The caves are in the California foothills, so we stayed in Angels Camp, which is the town Mark Twain talks about in The Celebrated Jumping Frog of Calaveras County. Angel’s Camp has a lot of frog statues and art. Personally, I liked this one. 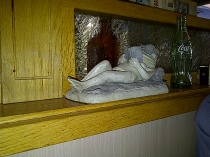 The next morning, we went to our one museum, at Railtown 1897 State Historic Park. If you like trains and/or history, this is the place for you. My husband does like trains (I had to leave him for 3+ hours once at the Sacramento Train museum before he’d had even close to enough time to make him happy.) And I’m pretty good with history these days. My son knew the music shops were coming, so he was very patient. Like I said, not a lot of photos, but does anyone else love how this looks like a big train stable?

And, apparently, I didn’t catch a photo of the water tower from the opening credits, but does this bring back TV memories for anyone of you?

Starting near lunchtime, we drove up and across the state and ended up, very tired but happy, sleeping under the trees in Humboldt Redwoods State Park. If you like redwoods and could skip the bother of setting up a tent to keep out the damp, I can highly recommend the Burlington campground here. Wherever else the fog was, and it was a lot of places, it was never in our campground at the same time we were. So we were able to just put down sleeping bags, curl up, and wake to this view.

Okay, this is actually a better view than I woke to, because, obviously, I wake up without my glasses. But as soon as I groped around and put them on, this is what I saw. Gorgeous. I’ve been around redwoods all my life, but I always forget how amazingly warm and friendly they are. Really.

We pretty much meandered through towns for the next day or two. We had breakfast at the Samoa Cookhouse, near Eureka, where I saw this stove in their museum.

Definitely bigger than Caro’s mother would have had, and I have no idea of the when of this stove, but it was good to see something even similar up close and personal. I liked how the waffle iron was set down into the burner spot–so it was either a burner cover or a waffle iron, depending on your current need. Which, you know, would most likely be waffles.

We did bookstores, a little sunshine, and coffee/tea/lemonade in Arcata. The reading selections of the day:

And we drove home. Stopped at one more music store, where my son bought himself a new ukulele–an upgrade from the one he’s had a while and perfect for a traveling-around instrument. We were all pretty tired by the time we saw this, but it always means about an hour left to the trip, so it’s a welcome sight.

And now, as they say, reality begins again. Came home feeling like, yes, I’d been away–which is always good–and that there were good things waiting for me here. (Along with the good things, those two guys, that traveled with me, of course!) I have picture books to draft and revise, and I have a plot to push through to the end. And a novel to write that, finally, feels like it could actually happen.