I don’t remember why I put The Remember Balloons on my to-read list. I’m very glad I did, though. The book, written by Jessie Oliveros and illustrated by Dana Wulfekotte, is a lovely story that does an absolutely beautiful job depicting the magic relationship that can exist between a child and their grandparent, what it looks like when that grandparent experiences dementia, and the loss we all feel when that happens. But the particular thing this story does is explore the way that loss can get mixed up with confusion, hurt, and anger–maybe especially, if you’re a young child.

I didn’t actually know what the book was about when I opened it this morning. In fact, the first page–where a young boy tells us that he has “way more [balloons] than my little brother”–made me think it was going to go down some path about sibling rivalry. The next page wiped that away, as the boy shares with his little brother what’s in his favorite balloon–the fun memory of his last birthday party. At this point, I thought the idea of balloons as memory holders was nice, but I wasn’t expecting the power that Oliveros and Wulfekotte give to the metaphor.

Warning: Some spoilers after this point.

Starting with the comparison of his balloons with his little brother, the boy follows that comparison to the fact that his parents have many more balloons then takes us to his grandfather–who has the most balloons of all. They go further, then, showing us how those balloons hold amazing memories–memories that the boy asks to hear about again and again. And then one step further, to a very important balloon–a silver one. 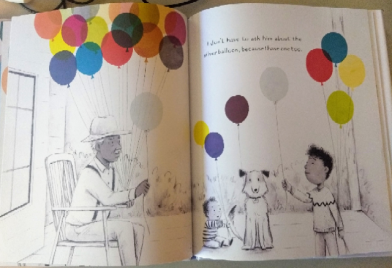 He has the same balloon. It holds a memory of “the day we stood on the dock till the sun went down, feeling tug after tug  on our lines. Grandpa and I must have caught a thousand fish.”

Having the boy tell the story, in first person, was the perfect choice, I think. His voice is simple and clean, but words like I and my and we keeps the story close and personal–the reader really is strongly drawn into the boy’s feelings. I, as an adult reader, recognize those feelings, and I think a young child going through a similar experience will recognize them, too.

“Grandpa’s balloons start floating away, faster and faster.
Running down streets and up hills, I watch the balloons grow smaller.”

And then, after a perfectly placed page turn and given a full two-page spread…

I’m not going to spoil the ending, but the crisis is absolutely perfect and the ending resonates with the hope of finding another, new way to connect with someone you don’t want to lose. Not every child will have the opportunity to take the step the boy does, and not every child will feel able to. But books like this aren’t here to present a one-size-fits-all solution, and they shouldn’t–life doesn’t always come with a solution. What this book does do wonderfully is show the thing one child tries, and–by doing so–opens up the possibility that another child–the child outside the book–will find something they can try as well.

There are a lot of books out in the world, created by people who want to help children understand the big, and sometimes bad, things that happen to them. And–let’s face it–to help the adults who are struggling to explain something they don’t fully understand. They’re hard books to write and hard books to illustrate–hard books in which to balance story and support.

The Remember Balloons succeeds on all counts.